Pranic Sneezing and Raising the Dead

More than a year ago I read this story in 2 Kings 4 that kind of blew my mind on many levels. Some of the Ah Ha's were personal but there are also some great universals about healing and yes, about Kundalini Yoga. :)

I recommend reading the whole story and then reading the rest of my post. But here is the cliff notes version: Elisha (not to be confused with Elija) often passes through this one town and a Shunamite woman always invites him to eat with them. Then she convinces her husband to make a whole room for Elisha so that he can stay overnight whenever he passes through. She recognizes he is a man of God and wants to help him.

One day Elisha decides to bless her for her kindness and so he tells her within a year she will have a child. She basically says, "don't mess with me if you don't mean that."

Within a year she has a son. He grows up a little--old enough to help his father with the reaping. Then he complains of a headache and goes home to lie down. He dies on his mother's knees. The mother doesn't tell anyone, instead she asks for the chariots to be saddled and flies as fast as they will drive to see Elisha far away on is mountain.

When she gets there, some interesting things happen. She tells the servant, who has gone out to meet her, that all is well. But as soon as she gets into Elisha's presence, she grabs him and basically freaks out and says, why would you promise me a son and then have him die.

The servant attempts to throw her off, but Elisha says:

"Let her alone; for her soul is vexed within her: and the Lord hath hid it from me, and hath not told me."

At that point in my life, I was recovering from a short-lived marriage and it was comforting to know that even prophets don't always know when some one's soul is vexed within them. Sometimes God might not tell us, for reasons of his own.

But on to the good stuff. Elisha eventually goes to the house where the boy is and performs and interesting healing. I think it is important to read it word for word here.

32 And when Elisha was come into the house, behold, the child was dead, and laid upon his bed. 33 He went in therefore, and shut the door upon them twain, and prayed unto the Lord.
34 And he went up, and lay upon the child, and put his mouth upon his mouth, and his eyes upon his eyes, and his hands upon his hands: and he stretched himself upon the child; and the flesh of the child waxed warm.
35 Then he returned, and walked in the house to and fro; and went up, and stretched himself upon him: and the child sneezed seven times, and the child opened his eyes.
36 And he called Gehazi, [his servant] and said, Call this Shunammite. So he called her. And when she was come in unto him, he said, Take up thy son. 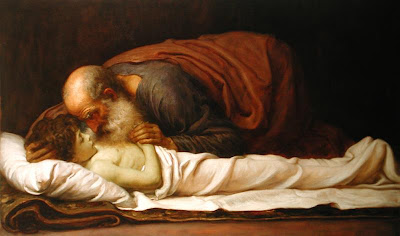 When I read this I was fascinated by the words "stretched himself upon." I immediately thought of two things. The first was I thought of stories I had heard about Yogi Bhajan. He was a great master, and by that I mean unlike anyone you know. He had powers. And my teachers have told stories about how he had the ability to throw his aura over people and take their stuff for them--in such cases when he knew they couldn't work it out themselves--and he'd work it out of his own aura. It was a very Christ-like thing. [FYI don't try it at home. I wouldn't recommend it unless you are Yogi Bhajan.] So I thought of that and wondered if that was what he was going when it says that he stretched himself. All the cross references scriptures are interesting. Elija does a similar thing in 1 Kings, and Paul raises someone from the dead by falling on him and "embracing him."

This strikes me as some pretty advanced and also simple energy healing. It seems to me that when a highly elevated person hugs you, it can be powerful enough to raise the dead. It might take a few times of being stretched upon as it did in this story (I love that he paced in between. Almost like he was waiting for a birth. A rebirth.)

The second thing I thought of was a night a few years before when I was already on the Kundalini rocket ship and was feeling really amazing. I was lying in bed and felt a presence come and lay down on me. Not in a sexual way. More like a blanket. It was protective and loving and I thought it was the energy of someone I knew. I still don't know who it was, but I know it was helping me. So I believe that this energy healing/stretching/embracing can come from both the physical and metaphysical realm.

The next part of the passage that I found super interesting was that the boy sneezed 7 times and then opened his eyes and sat up.

I feel like nothing in the scriptures is extra. Why would it mention this? I had all kinds of hypothesis at the time and only recently did I get the final clarity. You may not be surprised that it came from Yogi Bhajan. He was talking about sneezing and Prana.

If you don't know, prana is that life force. It gives life to the universe. It is the Light of Christ. It is in all things without being those things. For example, it is in air without being air. When you die, you still have some air in your body but no prana.

So the boy was dead. No prana.

On of the best ways to take in more prana is by using the breath. Even though it is not air, it comes in on the air, so if you consciously take in more air, you take in more prana and more life force. Yogi Bhajan compares it to Atomic Power. It is that energy that keeps the atom alive! Most people don't breath adequately enough and so their health declines. But some people have a large lung capacity and a store of pranic energy in the body. There is a special place in the body where you can actually store prana. It's kind of like a metaphysical pocket in the the 8th vertebra. That vertebra is connected to the heart by way of a nerve that passes through the diaphragm.


"Your heart is just a bunch of muscles and, when the heart nerve, which comes from the eighth vertebra, must adjust the electrical energy to accommodate a change in the flow of the Ida and Pingala nerve channels, the resulting shift in praana causes you to sneeze....So if you are shy to sneeze and suppress it, you are denying the heart the electrical adjustment it needs." - Yogi Bhajan

All along I had suspected that the seven sneezes acted like a sort of defibrillator on the boys heart. And it seems it is true. The sneezes electrically adjusted his heart. But it was the shift in prana which caused the sneezing. The shift in prana is something that must have happened miraculously through Elisha's stretching himself on him, perhaps transferring prana into him.


"A developed pranaic cavity can give healing power: 'Moment you will concentrate on that person and you have (control the) praanic cavity, your praanas will pass to the being. This is automatic and he will immediately feel the effect.'" - Yogi Bhajan quoted in Praana Praanee Pranayam 16-17

This reminds me of a quote from Parley P. Pratt about "spiritual fluid." If you don't understand praana the words "holy fluid" seem strange, but that is what he called it. It is clear to me though that he is talking about prana or the Light of Christ.

"The spiritual or holy fluid conveys itself, through certain channels, from one body to another in accordance with certain legitimate laws. The usual channel for all spiritual fluids whether holy or impure, in their operations upon the human system, or in their passage from one animal body to another is the nerves. A person commissioned of Jesus Christ and filled with this spiritual substance, can impart of the same to another, provided there is a preparation of heart and faith on the part of the receiver." - Key to the Science of Theology 110

That is all for today. Hopefully it inspired you to respire consciously and be a person with a huge lung capacity and praanic stores to spare.