To All You Clairvoyants Out There -- and All the Other Clairs 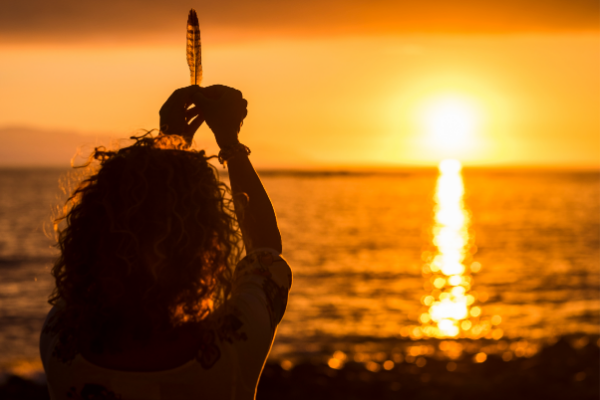 I once had a clairvoyant friend that I had to distance myself from because of her tendency to haul off (uninvited) and tell me everything she would "see" about me and my future or my past or who knows what. Enough times uninvited and it becomes like an assault. It's not that I didn't believe that she was "seeing" these things. The problem was that I felt really uncomfortable with the dramatic "style" of her seeing, and that she believed everything she saw was real.
Does that make sense? It didn't to me either. Until I learned more about what clairvoyance is, and about something called "atavistic clairvoyance," which finally made it all make sense.
I'll explain in a minute.
First, let me say this: What spiritual communities should really have built-in is a way for people who are new or advancing in their spiritual gifts to connect with others further on the path with the same gifts who can help them grow and also avoid pitfalls.
For example, if a youth showed signs of clairvoyance, clairaudience, healing, or let's say, great power of projection through prayer--they could be directed to learn from/talk to/gather with those who had more wisdom and experience with this gift.
But this doesn't really happen in our spiritual communities yet. A lucky few find support for their gifts or they seek outside help and learning. Often these spiritual gifts are developed through professional trainings. But, it's too bad about professional trainings in that people think they have to go into business after they take them. So many people either don't take them for that reason (because they don't want to be a professional). Or, the opposite might be true in that they think they are doing a training to be a professional, but then don't end up going into business or are not financially successful in business so they don't feel the trainings were "worth it." I think however you are guided to find and develop your gifts is probably the right path and well worth whatever it costs you in time, money or ego.
I give all this preamble to say that I am writing this blog post as a support/signpost for anyone trying to understand their (or their loved one's) spiritual gift of "clairvoyance."
I learned this from Catherine McCoun's book On Becoming an Alchemist. It's a great book if you like deep esoteric stuff. Here is the cliff notes on Perception and Imagination.
Most people have trouble with the idea of clairvoyance because they don't know at first when they are perceiving subtle perceptions. They expect the subtle world to be like this world. It's not. The subtle senses give us information that is difficult to describe. So, what we do is we translate it into images of physical things that have the same "style."
So when people (me included) talk about seeing, what we are doing is sensing and then assigning an image or imaginary movie to that perception. This way of describing what one "sees" can make newbies think that they are not "doing it right" because their perception was not exactly like that. Or it was very whispy and non-physical.
Some subtle senses are perceived in a way that one might translate into a sound or a sentence. So I might describe this as "I heard..." But in fact, there was not usually if ever an audible voice or sound. This is clairaudience.
There are subtle senses that correspond to sight, sound, smell, taste, and touch and also "knowing" (claircognizance).
Here's is an example--three people doing a healing might have totally different experiences: My friend O might have a sense that of a fire red splotch on my right side. My friend P might sense something that she translates as words or a thought in her mind: "Something is off with her hip." And J would just intuitively move her hands to that spot.
Most people sense auras in our own way, but very few will actually SEE a color around a person. What those who say they 'see' are doing is perceiving subtle energy which has a style of, let's say "blue." Or pink. Or black. Or Rainbow!
We all learn to do this mental imaging naturally. For example, when we read novels or poems we make images in our minds to go with the words/concepts in the story. If we didn't they would be really boring! But each of us would have a different mental perception of the novel's heroine and the sound of her voice.
Now let's talk about those who swear they see and that what they see is REAL.  Here is what McCoun says:

"What if I can't make the blue go away? By the standards we apply to our physical senses, that would mean the blue is "really there." We know that we're not just imagining a physical perception because it stays put. With the subtle world, though, it's exactly the opposite. Unthinking a mental picture should make it go away. If the object of a subtle perception appears solid, permanent, and fact-like as a physical object, the seer is hallucinating.
Some people hallucinate because they are physically or mentally unwell. But hallucinations can also be a a function of what hermeticists call "atavistic clairvoyance." Atavistic clairvoyants are overtaken by visions that seem very solid and real because they don't consciously experience the mental translation of the abstract into the pictorial. It happens too fast. Since they don't notice that their brains are interpreting subtle input, they can't correct a mistaken interpretation. Their subtle perceptions are too convincing."

McCoun says it's not unusual for things to get off to this kind of start with newbie clairvoyants, but if there is no underlying pathology, it can be easy to fix. The fix involves slowing down (or suppressing all together for a time) the conversion of subtle impressions to mental images. Like closing your eyes for a minute. Give those eyes a break. They will still work. Don't worry.
When you slow it down and consciously choose to imagine on purpose, you are less likely to be misled by your mental pictures--because you know you are making them up.
This might be a shock to some people who assume that the more psychic you are, the more solid your "seeing" should be.
Well now you know that's wrong! And you also know that anyone who insists their seeing is real, is likely to be misguided at some point (if they haven't been already) and to misguide others.  We all have to learn and we all make mistakes on the path. So I'm not judging.
If you have been misled, you're in good company. It's easy to get side tracked by the sparkly or wierd things in the astral garbage dump. Determining the source of the subtle perceptions is whole other blog post.
The thing to remember is that anyone interpreting subtle perceptions, even perfect messages sent from source, has to put it through their own imagination filter. Remembering this can hopefully make it easier for us to understand and maybe take the images a little less serious/literally.
Here's a personal story. A long time ago after my first divorce, I had a friend I used to play silly games with. We would use muscle testing to "read" each others fortunes or make up stories about our "past lives." One day she told me that I had a past life as an aborigine in Australia and I was forced to marry a neighboring tribe's son. He was abusive. I had five children with him, then I got sick of it so I murdered him. Then I met someone great. Or maybe my new man murdered the old one. I'm not sure. She said the abusive man in my past life was the ex in this life.
The next time she read my past lives, it was a different story but the similar elements were there. This time I was in England. Lots of long dresses and tea parties.  There was betrayal or abuse by men, then a rising up to my power. Possibly a new, better man.
Do you see the themes? Luckily, I knew we knew we were just playing. And yet. She was intuitive. And she was picking up subtle perceptions about the life I was living then (recently freed from an abusive marriage), and giving it the style of her imagination.
The stakes get higher when you believe all the things you are imagining are real. Or your friend or family member does.
I still remember when I was in college at the strange marriage-obsessed land around BYU in Utah and Steve Young (49er star quarterback at the time) was still single and actively looking for a wife. Women all over the valley were having dreams and visions that they were supposed to marry Steve Young. Some were already married themselves. I heard of more than one woman leaving their husbands over these dreams! They ranged in age from 18-55. The marrying-Steve-Young-dream was so common that my friend Eliza did her folklore project/report on the phenomenon. She told me about all her interviews with people and their dreams. Soon, I had a dream about him, too. Of course, I knew it for what it was: a chance to be interviewed and share my crazy dream in her folklore paper. Ha!
So was my friend that I described at the beginning hallucinating? Unwell? I believe she was an atavistic clairvoyant. But unfortunately she had been so long rewarded for being "special" that she seemed incurable at the time. But who knows what has happened since then. We are all on our journey. I can only keep my side of the street clean and not anyone else's. And that is only through the grace of God.
Wahe Guru!
I hope this was useful. If you need help with this, or have been through this journey and have comments feel free to chime in and leave a comment.
Labels: clairvoyant imagination intuition perception psychic seeing subtle senses visions